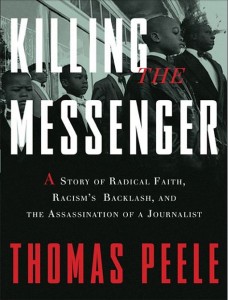 Surprisingly, it’s embarrassing how many journalists don’t know Bailey’s tale. And fewer know the details. That’s why Thomas Peele’s new book “Killing the Messenger: A story of radical faith, racism’s backlash, and the assassination of a journalist” is such an important tome. It provides the background necessary for future historical context on a number of subject matters, including the exhaustively reported reasons why Bailey was murdered. And in true respect to the’s book subtitle, the details of the murder and the culprits behind it spell out the radical history that influenced the violence against Bailey and the attack on the first amendment in doing so.

Bailey, the editor for the Oakland Post, was murdered Aug. 2, 2007 in Oakland, Calif., while working on a story about Your Black Muslim Bakery, the front for a black muslim cult that was an offspring of the Nation of Islam. The group’s patriarch, Yusuf Bey, was an alleged murderer, rapist and child molester. He has anywhere from 25 to 45 children according to the book, but was never convicted of his crimes. Charged with 27 counts of rape, he died of cancer in 2003 before he ever went to trial. His followers were equally violent, often taking in ex-convicts among their ranks while claiming to rehabilitate black men in the community. In the aftermath of Bey’s death, the cult warred over control of his fledgling bakery business before his son, Yusuf Bey IV, came into power. Under Bey IV’s stewardship, the bakery was going through bankruptcy in 2007.

Bailey’s story, which has never been printed, was aiming to shed light on the illegitimacy behind the bakery’s bankruptcy. But it also was aiming to report on the sordid, violent history within the cult’s North Oakland compound and the San Francisco Bay Area. Bailey was going to use an unnamed source to back his reporting, something to which his publisher was loathe to permit, fearing the retaliation of the cult’s followers.

It was typical of Bailey, Peele wrote in the book, to not dig as an investigative reporter like the author would. If he did, he’d have all the documentation he needed to write a solid report on Bey IV. Peele’s tepid opinion of Bailey as a journalist, if that much can be gleaned from the book, plays heavily into telling of Bailey’s story as well. Before he was killed, Bailey was on a downward spiral in his career. Fired from the Oakland Tribune for ethical lapses, and far from his days at the Detroit News where he did his best work, a story on the notorious black muslims in his community was a surefire way to keep his name abuzz, if anything.

All of which is the background to Peele’s reporting with the Chauncey Bailey Project, a nationally recognized and awarded investigative coop in which Peele was the lead reporter. In the aftermath of Bailey’s death, Peele and scores of other journalists came together to pick up the pieces of Bailey’s reporting and flush out the story behind the bakery, the culmination of which is this book.

History is key here, particularly to understand the perverted and misguided nature of this black muslim offshoot. The Nation of Islam, from its days in Detroit under W.D. Fard in the 1930s, and the Noble Ali Drew’s Moorish Temple in Chicago of the 1920s, are explored in equally exhaustive detail. There’s no fact summarily undocumented, as exemplified by Peele’s extensive bibliography. It’s the roughest part of the book’s 441 pages to stomach, but paramount to understanding how a cult like Your Black Muslim Bakery can exist in the 21st century and how the group’s followers are colored by a dogma that promotes racism and antisemitism, which originates from the racism that helped spur the Nation of Islam’s founding.

All of these influences — the journalism, the history and locale — helped pique my interest. But there’s more for me personally in the pages of this book that go beyond my being a former intern at the Oakland Tribune.

I grew up in San Francisco in the Fillmore and went to Galileo high school where I played football with Richard Lewis, a Your Black Muslim Bakery follower who is now serving a life sentence in prison for his crimes in association with the bakery. I also grew up in the same townhouses as Antoine Mackey in the Fillmore, the convicted gunman in one of the bakery’s murders. And I am acquaintances with Bob Butler, a key reporter in the Chauncey Bailey Project and an NABJ board member, a group I am affiliated with. But I also can remember a time when I purchased bean-pies from the bow-tied members of the bakery, not interested in supporting the group as much as I was interested in their tasty treats. I also remember a time when they served as security for a number of functions I attended in Oakland and San Francisco. They were always a peculiar group, despite my ignorance of them.

So there are a number varying interests I have here, none of which I believe have warped my views of the atrocities committed by this group. It’s Lewis’ presence, whose crimes are outlined with clarity by Peele here, that drew me to Chauncey Bailey’s coverage with a rabid appetite. This is someone I knew well. Someone who surprisingly had an evil streak in him. In high school, I could never take him too seriously. He was a goof. And, above all, he was a follower. But as things stand, he’s convicted of torture and kidnapping. What he did was despicable. Mackey, whom I’ve known since he was a little boy, seemed destined to live this life. He’s serving a life sentence for helping kill Bailey as the getaway driver and killing another man, Michael Wills, because he was white.

In reading “Killing the Messenger,” one relives the four and a half years of stories written by the Chauncey Bailey Project while getting the added caveat of knowing the outcome. But it’s the details tied together in Peele’s thorough style as an investigative reporter, the historical influence of racism among black muslims, and the revelations only top-notch journalism can produce about this cult, that makes this book a must read for journalists and historians alike. Or if you’re like me, to figure out what happened to your high school buddy.

“Killing the Messenger: A Story of Radical Faith, Racism’s Backlash, and the Assasination of a Journalist” — Crowne Publishers, 2012. $26 hardcover, $12.99 e-edition.