On Monday I gave a talk to the staff of the Berkley Beacon, the student newspaper at Emerson College in Boston. The talk/workshop was about convergence journalism, or backpack journalism. While making my way home, I realized I only touched on maybe half of my notes on the topic. So I wanted to share here what I wrote down in its entirety, including the powerpoint I brought along with me.

Convergence journalism… or as many in the industry call it: backpack journalism.

A lot of what backpack journalists do can be traced back to the resources they have at hand at their news organizations. But I like to think that a good portion of multimedia journalists are just extremely hard workers.

There are certain traits I see in others that do the job. Some I have myself and some I hope to attain. And then there are specific skills necessary, a lot of which you are learning right now at Emerson. So I’m going to run down what I believe to be the skills necessary to:

But first, let me just fill you in on who I am and my background to give you a sense of where I come from and how it is I have come to do what I do.

I was a freelance sports correspondent with the Vallejo Times-Herald in 2004 back in California. Prior to that I had worked on my school newspaper at City College of San Francisco, a junior college. I did everything at City. Write, edit, and paginate pages. It was the first time I used Quark. At the Times-Herald though, I got my first taste of non-student or peer editing. But I was solely a reporter and didn’t have any other responsibilities but writing my story for the day. 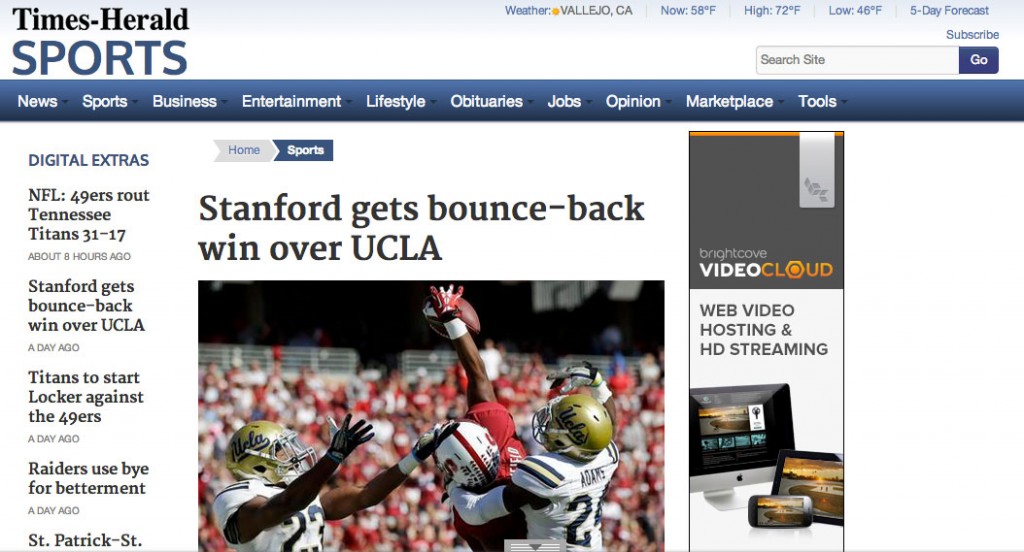 I went to California State University, Chico where I was a sports reporter, sports editor, and online editor for the Orion, the student newspaper. I sat in critiques like yours so I know the process of getting your lunch handed to you after a bad week. But it was around that time that blogging was really just kicking off in newsrooms. And there was this sorta new thing called WordPress. Long story short, I blogged the hell out of a trip to Hot Springs Arkansas to cover the women’s basketball team in the NCAA tournament. That was my introduction to rapid reporting. We also did podcasting and “quick updates.” 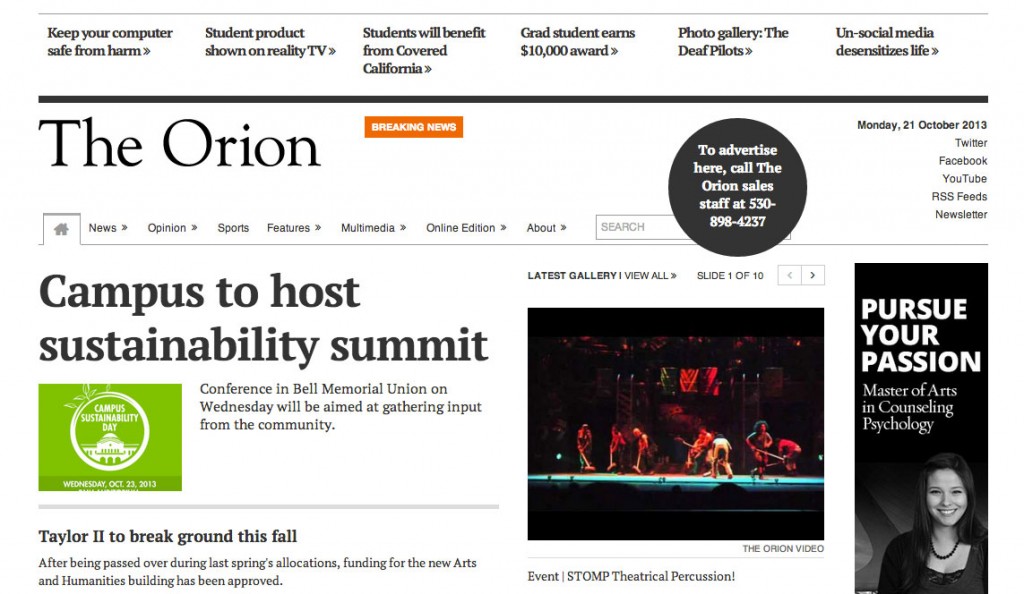 I had internships at the Oakland Tribune and the Marin Independent-Journal. I was a general assignment reporter for the Tribune, covering cops and doing small features for the metro section. There was a bit of politics added in their too. I interviewed the Honorable Ron Dellums once. He was the second person I had ever known that wished to be called Honorable before their name. Anybody know the other? The Honorable Minister Louis Farrahkhan. Yeah. That’ll throw you off. Anyways, the Tribune was my first opportunity to be edited by a major metro desk. I learned a lot from one of the best cops beat writers in the country. 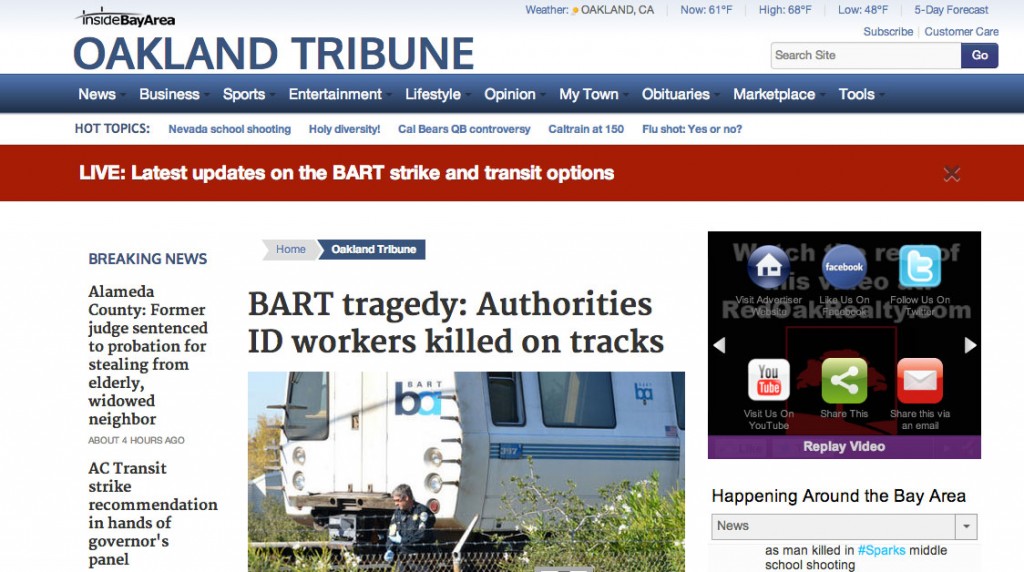 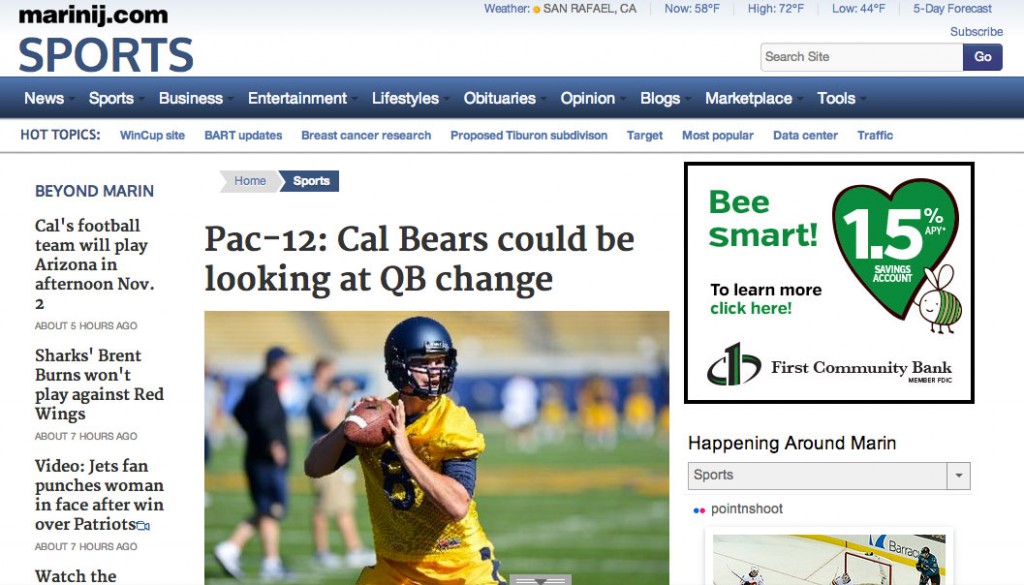 Not too long after that, in August of 2007, I got my first job at The Union, a community newspaper in the Sierra Foothills of California, as a sports reporter. It’s a small town in Grass Valley, California. Only 10,000 people about 2 and a half hour drive from San Francisco.

Anyways, I got to cover one of the bigger high school football programs in the state in Nevada Union. It was a great team that ran the Wing-T. It was fun because I got to cover them like a beat, which is not really what you do when you cover high school sports. Everything is pretty general. That’s when I first joined Twitter, true story. I am one of those few people that can say they were on Twitter in the first year of its existence.

But I didn’t know what to do with it. So I left it idle while I focused more on all the things that you guys are going to get thrust into: designing newspaper pages with InDesign, figuring out photoshop for something more than just re-sizing an image, and utilizing video for the very first time.

I would, whenever the football team got near the end zone, whip out the company camera and record the rest of their drive while taking notes. I was able to put together some pretty cool highlight reels of just the touchdowns from each game.

But the problem I ran into was I didn’t have any formal training editing video. And I didn’t have an appreciation for the time it took to process GOOD video. So I took a class at a community TV station. I thought it was important enough at the time to learn how to use Final Cut Pro. It’s one of the best things I’ve ever done.

Now, while at The Union. I took on multiple jobs. I went from just being a sports reporter to being a reporter and the paper’s online community manager. And then I switched from the sports desk to the city desk. I actually started doing my first live coverage using CoverItLive of a Nevada City Council meeting. The big issue of the time was whether or not the city was going to allow a marijuana dispensary. The news went out in the live blog as the vote occurred. 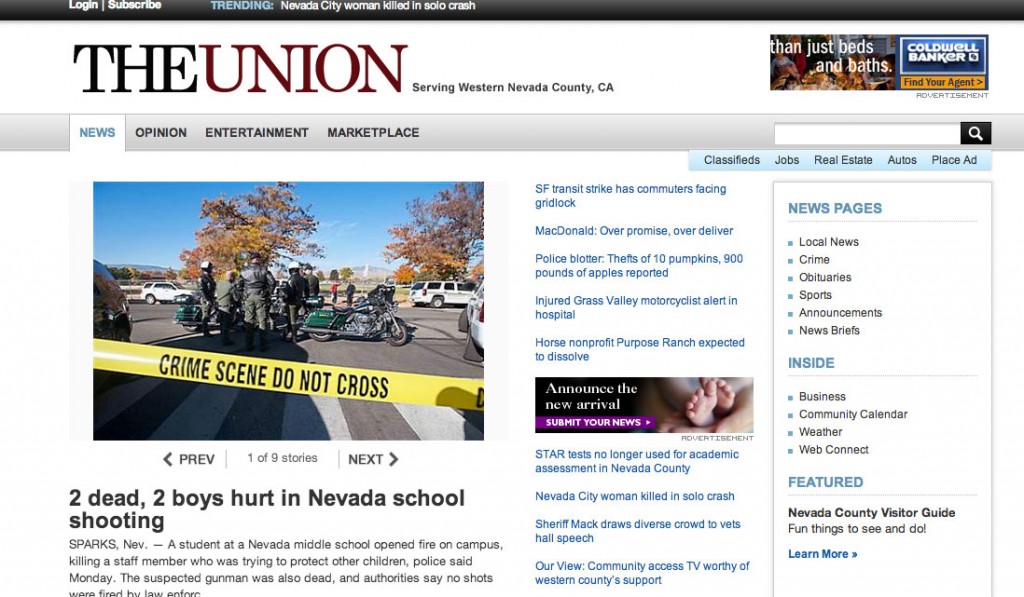 And then I came to the Globe not too long after. My technical title is Content Producer, which means to say I provide content for the website Boston.com. I was hired specifically to help the Globe compete with ESPN Boston.

I run our live coverage of the Patriots and high school sports, and help elsewhere as needed. I shoot video. I put together features for our website. And I’m always seeking out creative ways to tell stories on our website. But I understand the premium is on the three core assets of a good news organization: Great copy, great photos, and good video.

So the necessary skills to do my job now, which many people want, basically reflect the tools and skills I picked up over time and through a ton of experience.

So where does that leave us?

It all gets summed up in a work week of mine. Because I help cover the New England Patriots at Boston.com, I get the opportunity to do some traveling. I was at yesterday’s game in New Jersey as the Patriots lost to the Jets, 30-27. You might have seen that there was some controversy. Rule 9, Section 1, Article 3-B.

The great thing about a live blog is you look can up the rule on the internet and have it on your website in no time. For the Globe, we utilize the tool ScribbleLive. It is not a free tool. But it’s highly customizable and it provides us with some flexibility.

For myself, I was able to gather some quotes from players, including the now infamous Chris Jones, Patriots coach Bill Belichick, and others on the team. Those quotes, along with the rule and other reactions, were added to the blog as they came in. The nice thing about a tool like ScribbleLive is there are apps for smartphones, on both iOs and Android. So when I leave my computer in the pressbox to get some quotes, I can update the blog from my phone. Which is coincidentally why I don’t use my phone as a voice recorder.

But to really understand the convergence, to really grasp all of what I do, consider my work day: I get to the stadium 3 hours before kickoff. I write a wrapup for each offensive and defensive series in the live blog. And in addition to that, I add at least four entires to our Patriots blog. By the end of the day, I’ve typed more than 5,000 words.

And then I do video. I appear on camera with CineSport, a video portal that has partnerships with news organizations across the country. My work day ends up being close to 11 hours. The game is just a fraction of that.

Now, stepping back, what I’ve described is how you would use a tool like ScribbleLive, or Storify, or Twitter, or even just a regular old WordPress blog that you keep updating, for one event. But there are times in which you need to have rolling updates for a number of events. Not everything is broken down into quarters and periods. The Government Shutdown comes to mind. Be mindful that as long as you’re getting content up in a timely fashion, and updating continuously, it’s quite OK to stretch the definition of live for your blog.

But also consider that there are breaking news situations where the information is coming faster than is humanly possible to disseminate and discern. That’s how the first moments of the Marathon bombings were. I was on the desk at Boston.com, doing a pretty cool photo map interactive of runners that you’ll never see. I got my first confirmation of the explosions on Instagram, a picture I’m sure many of you have seen.

I’m proud to say that my colleagues and I were able to cobble together some fine reporting during those horrific hours by exercising patience, particularly when it came to the areas of taste (bloody pictures) and the number of casualties and injured. Actually, on Sunday, the Online News Association awarded us with their breaking news award. So consider again that going live, no matter the tool, is a huge part of being a backpack journalist.

Now as I noted, doing video is a huge part of all levels of journalism. At the Globe, we do it on a number of levels, economically speaking.

When I chat with CineSport, I do that via Skype in what I hope to be the quietest area of the press box.

But we also do shows like Globe 10.0, Boston Sports Live, Take 2, and the Tech Lab. And then we do stand-ups, which are usually one or two talking figures discussing an issue or news event, like the Patriots game or a case at trial. Our Big Story video series would fall into that category. It’s the easiest kind of video to do, because all you need is a camera, a tripod, a microphone, and some decent light to get it done.

On a much lower level, you can always just use the camera in your laptop, smartphone, or digital camera. Just make sure to consider, again, your light and your background noise.

My one piece of advice: It’s better to have bad light than it is to have bad sound. A good mic is your friend.

So we’ve gone over the skills you need, the experience you should try to attain (everybody’s journey is different), some of the tools that I use that help me do my job, and some short and sweet tips on video.

I would be remiss if I didn’t discuss social media with you. It’s such a huge part of driving traffic. Understanding the social ecosystem and search engine optimization and then capitalizing on it is a point of emphasis for every content producer. My only point to you is embrace it. It’s apart of the present of journalism and it will be apart of the future. Be open to new platforms and new tools. I’m sure when you’ve all landed your first jobs, there will be something new for us all to consider.